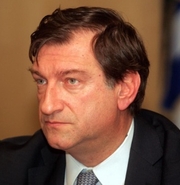 Sokratis K. Katsikas was born in Athens, Greece, in 1960. He received the Diploma in Electrical Engineering from the University of Patras, Patras, Greece in 1982, the Master of Science in Electrical & Computer Engineering degree from the University of Massachusetts at Amherst, Amherst, USA, in 1984 and the Ph.D. in Computer Engineering & Informatics from the University of Patras, Patras, Greece in 1987. Currently he is a Professor with the Center for Cyber and Information Security and with the Norwegian Information Security lab, Gjøvik University College, Norway, Professor of the Dept. of Digital Systems of the University of Piraeus, Greece (on leave), member of the pool of experts of the Institutional Evaluation Programme of the European University Association and chair of the Steering Committee of the same programme. He has been the Rector (2003-2006) and Vice-Rector (1997-2003) of the University of the Aegean, member of the Board of the Hellenic Quality Assurance Authority for Higher Education (2006-2008), member of the Board of the Hellenic Authority for Information and Communication Security and Privacy (2008-2009), Vice-President of the Panhellenic Federation of University Faculty Members (2009), the National Representative of Greece to the Management Committee of the 7th EU R&D Framework Programme “People” (2007-2009), the General Secretary for Telecommunications & Post of the Ministry of Infrastructures, Transport and Networks of the Hellenic Republic (2009-2012), member of the Committee for Information and Communication Technologies of the Greek Government (2011-2012), Chairman of the Technical Advisory Board on Information and Communication Technologies of the Ministry of Administrative Reform and Electronic Government (2011-2012), the President of the National Education Council of Greece (2013-2015), and the President of the Council of University Education of Greece (2013-2014). His research interests lie in the areas of information and communication systems security and of estimation theory and its applications. He has authored or co-authored more than 230 journal publications, book chapters and conference proceedings publications and he has participated in more than 60 funded national and international R&D projects in these areas. He is serving on the editorial board of several scientific journals, he has authored/edited 26 books and has served on/chaired the technical programme committee of more than 400 international scientific conferences.

We use cookies to ensure that we give you the best experience on our website.Accept all cookiesOnly essential cookies
Go to Top